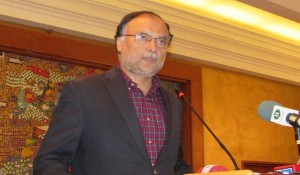 Minister for Planning and Development Ahsan Iqbal told the Senate on Wednesday that implementation of China Pakistan Economic Corridor (CPEC) will attract more foreign investment in the country.

He told the Senate during question hour that the government wants to complete projects under the corridor well in time. He said it is a good omen that the national leadership has reassured its solidarity on CPEC during recent meeting with the Prime Minister.

He said, despite energy projects under CPEC, work is also continuing on other projects. These projects include hydel projects like Diamir Bhasha, Dasu, Terbela-IV and V, Kurram Tungi dam and others.

Answering questions, Minister for Climate Change Zahid Hamid on behalf of Finance Minister told the House that Pakistan has received over fourteen hundred million dollars as loans from foreign countries and financial institutions upon signing of new loans during the same period.

He said Pakistan has also received over five hundred million dollars from IMF under Extended Fund Facility during the last three months. He said the loans were required to boost foreign exchange reserves and improve balance of payments.

The Minister said the debt to GDP ratio was 64 percent in 2013, which has been lowered to 59.1 percent in 2015 as a result of Government’s policy of financial discipline. He said country’s foreign exchange reserves stood at 20.8 billion dollars.